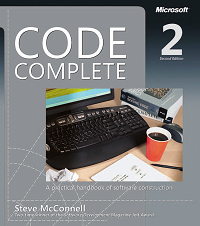 Consider one book that would try to compile all best practices for all past years for software construction. With about 450 items in bibliography of most important publications at the time (second edition published in 2004 y.) this book endeavours to bring development process at a totally new level. Essentially this book interprets most important those publications and gives guidelines for building software. It takes recommendations of gurus in the field and scientists and presents practical rules for effectively building quality software thus narrowing the gap between production and research. Hence the title of the book which implies that it is some complete set of laws.

The book is divided into seven parts. Giving some base terms and ideas in part I, author goes from the very bottom of construction process, the code itself (parts II, III, IV) to upper processes. Part V is about working with existing code. Controlling system development is in part VI. And the last part VII is about requirements to creator itself. For quick use the book includes checklists for all stages of construction and many figures and tables as well as key terms. Thus can be used as a quick reference.

Below are my notes from the book (unfinished).

Chapter 11. The Power of Variable Names