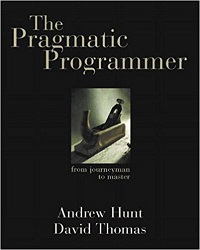 This is a popular book from 1999 y. which don’t lose its value even now was created by coders who did their applications in 80-90th. It looks like authors got their success as writers or speakers more than by actually coding something. As the title entails it is about how to become productive programmer, rules for it. Those vary from general (like fix a ‘broken window’) to specific ones (like use postconditions). Most of the time it is better to think out your examples to connect dots, to remember it but still examples from the book can be taken also. It has some enlightening thoughts about programming philosophy, e.g. it states that the main matter we mangle with is plain text thus we have to master right tools. I use rules from this book in my everyday work and strongly advice this to any programmer regardless of her programming language or platform. So below are my notes from this book.

Ch 1. About philosophy of PP, about love of PP. General rules of PP

In short: It convinces for using plain text, shell, one power editor, version control system and other.
Intro

Ch 4. Protection of code from yourself, other code and user.

Intro. You can’t write perfect code. Protect code from itself and from other code. As on road, none is sure above actions of others.